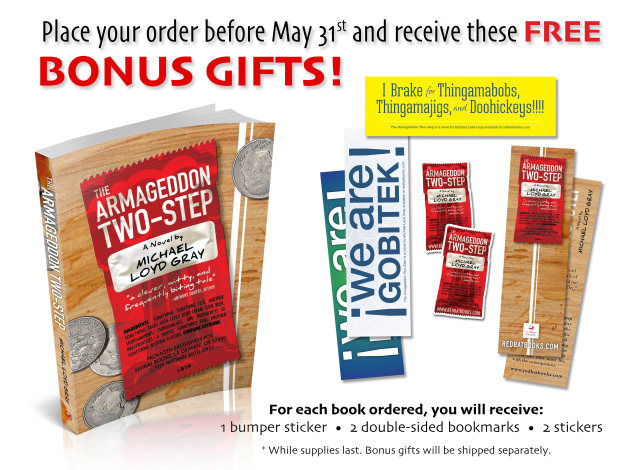 For each book ordered, you will receive:

* While supplies last. Bonus gifts will be shipped separately.

The Armageddon Two-Step is a novel about reality and truth built for the Age of Trump; a comedic farce tinted with magical-realism about a young man named Shelby Albert Goddard who saves the world and then must live with the consequences.

Add to Cart
early praise for the novel:
"The Armageddon Two-Step is a clever, witty, and frequently biting tale of unlikely fame, carved out by a genuine storyteller."
—Anthony Squiers, author of Madness & Insanity
Co-editor of Philosophizing Brecht: Critical Readings on Art, Consciousness, Social Theory and Performance
"A small confession. I’ve been reading Michael Loyd Gray’s prose for more than 30 years—since he was a reporter on a business newspaper in Arizona as I was his managing editor. Over this long period of time, Michael’s writing has only gotten better. There’s a pleasant rhythm
to his sentence construction that eases you into his stories like finding relaxation in your favorite comfy chair."
—Steve Bergsman, author of a dozen books;
his next book is I Put a Spell on You: The Bizarre Life of Screamin’ Jay Hawkins
“Gray is at the top of his game in The Armageddon Two-Step. He leads the reader on a taco-fueled, rollicking good time along with his colorful cast of characters, including the unlikely hero, Shelby Albert Goddard, who saved the entire world from destruction with only thingamajigs, thingamabobs, and doohickeys. Saving the world earns Shelby grateful thanks, lots of money and a government handler who is charged with keeping him anonymous. It also earns nightmares and close encounters with people not of the world he saved. As he moves through his post-armageddon life, Shelby must learn to deal with being a hero.”
—Ned Randle, author of Baxter's Friends, Running at Night,
and St. Michael Poker & Drinking Club
“Michael Loyd Gray’s The Armageddon Two-Step is a satirical novel about celebrity culture, corporate sponsorship,
a secret government agency, and the general public’s inability to look beyond the hyperbolic spectacles produced by corporate America and government institutions... The Armageddon Two-Step’s humor shows the American Dream as the American-Fallacy,
through Shelby’s melancholic rise to fame.”
—Sean Karns, author of Jar of Pennies